My daughter Katie and I were introduced to Michaela by Ernest Dillon, who has known her for years and holds her in high esteem. He had seen a talented young mare that she had for sale. The mare is our lovely Lyra, who we have owned for 2 1/2 years. Lyra is exactly as Michaela described. Michaela was extremely helpful during and after the sale, and has been teaching Katie on a regular basis since then. Out of all our horses, Lyra had the best start to her competitive career by being lucky enough to be produced by Michaela – whose empathy and gentle persistence resulted in an extremely trainable horse. Lyra and Katie are now competing at Newcomers and BD Elementary, while being successful at BE100 level eventing. They are aiming to be selected for the BE under 18 national championships this year. We cannot thank Michaela enough for all her help. She has a wonderful style, which reflects her deep understanding of horses. She is engaging but she is also very clear when she thinks you can do better! 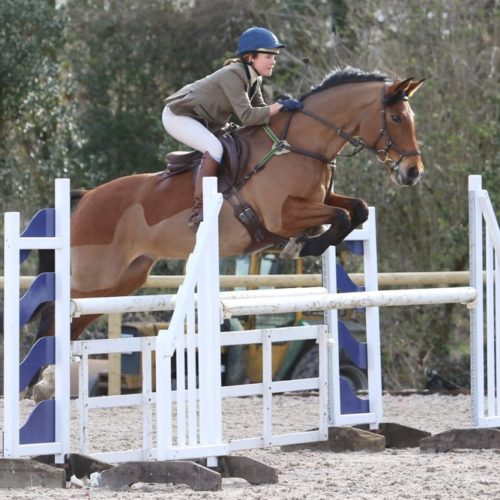 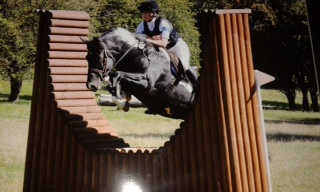 Michaela Tomlinson has taught me over the last few years with various horses in different disciplines. She is very straight forward in her way of teaching and easy to understand.  She has given me goals to aim for which I find very helpful and suggests competitions or shows that she thinks I should go to.  Both myself and my horses have improved massively with Michaela’s help.

I bought Maddie from Michaela a year ago and I am more than happy with her. Since buying her she has taken me from jumping British Novice to confidently jumping Newcomers with us about to make the next step up! I found the advert was very honestly written and that Michaela couldn’t do enough for us, even taking her to a show for us to see her out. I wouldn’t hesitate to buy from her again! 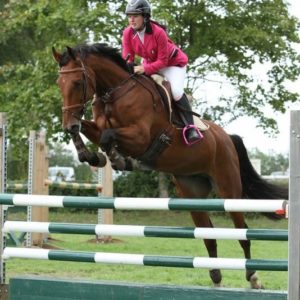 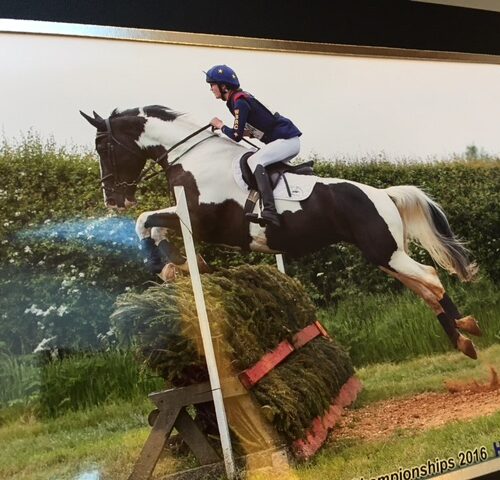 I bought Kazan, a 16.3hh Dutch warmblood from Michaela in Autumn 2013 when he was 7. I was looking for a safe all rounder to get me back into riding at riding club level after having my children and a horse that was good  to escort my children out hacking.

I arranged to meet Michaela at Felbridge show ground to try Kazan out over their show jumps and it also gave me a chance to see him away from home. I really liked him so decided to try him cross country a week or so later, he was bold but sensible so I decided to buy him!

Since then we have done combined training, hunter trials and dressage, hunting along with lots of hacking, my younger daughter calls him a police horse as he’s so sane and sensible! We have worked hard on his flatwork and I was delighted when he started winning and getting high placings at dressage.

In April this year my older daughters beloved 14.2hh event pony went lame so we decided to see if Kazan was up to the challenge of stepping into his shoes and he has been amazing with a 13 year old rider!  We started the season in March with a BE80 at Aston le Walls (she was still only 12 years  old at this point) where he finished on his dressage score for 8th place, and moved up to several pony club 90cm competitions in April and then a BE90 at Tweseldown all of which he flew around, he adores cross country and takes on anything.

In June he was part of the winning junior 90cm team at the Festival of the Horse Championships storming round a tricky and technical cross country. He has also represented our riding club in the intermediate outdoor show jumping qualifier coming 2nd, and it was his first time jumping a water tray which he flew!  He has now tried most things including hunting which he also loves and we are hoping he will move up the levels in eventing.

I wouldn’t hesitate to recommend Michaela she is very genuine and her horses are completely as described. They also have good temperaments and Kazan has no vices he’s very easy to look after which was important.  We will be back for another one at some point  and maybe this time I will get to keep it!

Michaela Tomlinson has taught me over the last few years with various horses in different disciplines. She is very straight forward in her way of teaching and easy to understand.  She has given me goals to aim for which I find very helpful and suggests competitions or shows that she thinks I should go to.  Both myself and my horses have improved massively with Michaela’s help.


I bought Willman from Michaela Tomlinson in August 2013.  Within six weeks I had passed my Pony Club B test on him.

We qualified for the Dengie Winter Dressage Champs and won our first horse trial, qualifying for the Pony Club Intermediate Champs, coming 12th.

We qualified for the Area Tetrathlon Champs in Hull, where he flew around a massive XC course clear.  We went to Tattersall and jumped clear round the 1  Star track in the Open Tretathlon Champs, coming 5th overall.

2016  So far we have been third in the Winter Dressage League, qualifying for the final.  We also have qualified for the Winter League Show Jumping.  We won the PC Intermediate Horse Trials. 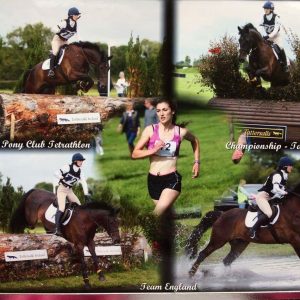 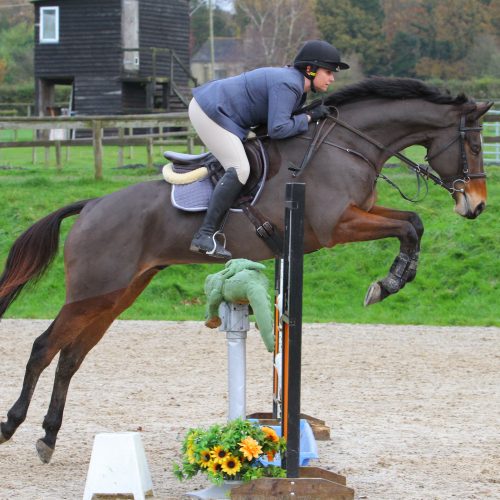 Michaela has been my instructor since Pony Club and has taught me for many years since, improving my riding on the various horses I have owned.

Two years ago I bought my horse Carlos from Michaela.  I wanted a safe, trainable all rounder that I could compete in eventing and show jumping.

He has taken to show jumping and eventing and within 3 months of owning him I had competed in my first Discovery, after many lessons and encouragement from Michaela.  Carlos is a fantastic, talented horse with the most trainable attitude.  I could not have wished to have found a more suitable horse and would recommend Michaela to anyone as she has a great talent for matching the right horse and rider together.


I have known Michaela for over 30 years.  I have had the privilege of helping her with her event horses when she was a young lady.  She is a talented rider with natural feel and understanding of horses.  She is also a good judge of horses and has the rare gift of being able to match the right horse with the right rider.  I purchased Blue, a wonderful horse for my partner and she is having a great time.  She has gone from a nervous passenger on her previous horse to being a serious competitor on him.  I have also acquired a really great horse from her and after the absence from competitions for two years I am back.

Over the past few years I have taken many customers to her to buy horses and all without exception are hugely successful.  I will continue to do business with Michaela and will make my clients very happy. 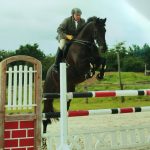 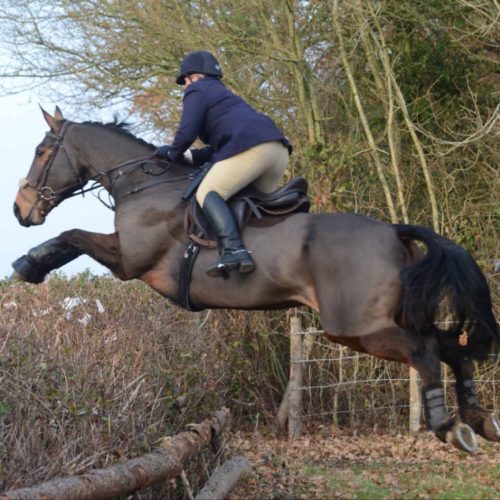 I was recommended to Michaela and never looked back. I had tried two horses before and nearly bought but both failed the vet! I also had tried horses through private adverts and was so disappointed when the horses are not as described.  When I arrived at Michaela’s she made me feel at ease straight away. Discussed what I was looking for and what budget I had to spend.

Paddy has been the most fantastic horse , I got a lesson for free when trying him and I felt Michaela wanted to fit rider to horse and horse to rider. Paddy has taken me from a nervous rider (moving from ponies to horses and not wanting to go over a pole !) to enjoying hunting and dragging all season. He has never been sick or sorry and looked after me ( even when my eyes are shut coming to a big fence!)
I can’t recommend Michaela enough for matching the right horse to rider and riders needs.
Thank you Michaela , I wouldn’t be having the fun I am with my super horse without you.


I purchased Comet from Michaela in May 2017.  I wanted a horse that would help me regain my confidence jumping and allow me to participate in all Riding Club activities.  Comet was exactly as described  – an all-round good fun horse.  Comet has a wonderful temperament and even during the winter months when I can’t ride so often remains sane and safe, although still has plenty of character and a skip in her step.

Michaela was extremely helpful during my viewing and allowed me to take as much time as I required to try Comet out.  I have since competed in Dressage, Combined Training Eventer Challenges and have had some wonderful successes.  We have represented our riding club in both dressage and show jumping teams and qualified for the London and South East championships.  I have remained in contact with Michaela via face book posting all our varying successes and Michaela has always been overjoyed and encouraging of how well we have been doing.  I have on numerous occasions been complemented on Comet and asked where she was purchased from.

I wouldn’t hesitate in recommending Michaela.  She is someone who doesn’t hurry her horses but takes the time to get them experienced, out and about, before allowing them to be put up for sale.  Thank you Michaela for all your support and for finding my new equine friend. 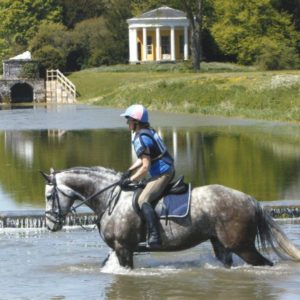